We use cookies and other technologies to improve your online experience. By using this Site, you consent to this use as described in our Cookie Policy. Disable this notice.

What do leaders need to cope in a VUCA World? 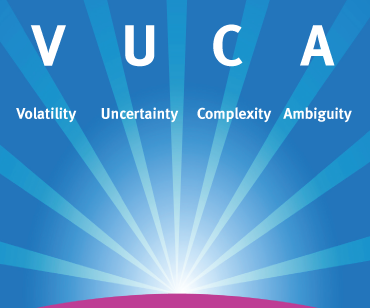 We often hear these days that we’re living in a VUCA world, which means a world characterised by Volatility, Uncertainty, Complexity and Ambiguity.

In other words, the world is changing at an increasingly rapidrate and when problems arise they are often caused by a complex chain of circumstances, with uncertain and ambiguous consequences..

So what attributes and qualities do business leaders need to be able to perform effectively in this chaotic and challenging environment?

Nigel Povah, chairman, chief executive and founder of a&dc, believes that in order to tackle the demands of this  VUCA world, leaders must be able to utilise  a range of different skills.

This is where a&dc‘s LIVED model is “very critical”, he argued. The model comprises five dimensions of leadership – Learning, Intellect, Values, Emotions and Drive – and sums up the qualities Mr Povah believes a strong leader must possess.

“Three of those dimensions have been around for some time,” he commented.

“It’s always been recognised that leaders need to be intelligent, so the Intellect dimension of LIVED is an obvious one.

“Over time many leaders have  been selected because they have either been well educated or they’ve risen to the top of organisations because they can demonstrate a level of intellect.”

Mr Povah says this intellect is required because leaders must be able to look at a situation, analyse it,  weigh it up and then make decisions quickly.

Drive, is another well-established leadership dimension,  because leaders need plenty of energy and passion – and this needs to be infectious.

“When it is, it will inspire and motivate the troops and makes them more willing to follow the leader,” Mr Povah remarked.

This is intrinsically linked with the Emotions  dimension of the LIVED model. Leaders must be able to understand people and how best to relate to those they work with. They must also be sensitive to them and pick up on the issues and vibes that are going on in their interactions.

But at the same time, they must be aware of their own emotions and be conscious of how they behave in certain situations.

Mr Povah believes that if leaders can get this right, they can ensure their behaviour conveys the right impression to the people they are dealing with.

“They’ve got to be tuned in to their environment and know how to react effectively,” he said.

However, he stresses that these three traditional dimensions alone do not guarantee a person is a good leader.

Indeed, Mr Povah points out that a&dc‘s research has found that Values and Learning are also important additional dimensions.

Tesco was flagged up as an example of where this is apparent, as its recent financial irregularities demonstrate it has lost sight of critical organisational values, such as honesty and integrity.

This means that if senior managers had remained true to corporate values, they would have questioned what was going on.

“If an organisation has really strong, clear and well defined values that are well understood, they become a form of regulation,” Mr Povah said.

“They regulate how it behaves and what it does, because values define an organisation’s culture. The two are interlinked, you can’t separate them.”

The banking scandal was identified as another example of where organisations have slipped up because they failed to have a strong set of values. By contrast, Apple has clear values – such as a desire to innovate and create cutting edge technology – and they give it a clear sense of purpose.

But Mr Povah believes learning is also a critical part of the leadership mix, as they must learn what has worked well and what has worked badly in the past, so they can act accordingly.

“Leaders must be  learning  from their day-to-day working  experiences,” he commented.

“Learning needs to be a constant in the new world we’re living in, as the ability to adapt to new challenges is more critical than ever before.”

Mr Povah describes the LIVED model as a rounded model that covers all of the things that are really important to leaders.

“Because of this VUCA world, where change is so dramatic and so fast-paced, the leader has to  question things all of the time, asking are we doing this the best way we can, are we learning from our mistakes and trying to eradicate them?

“Are we able to respond quickly when such issues arise, rather than taking too long to make such decisions?

“If you take too long to work out what’s gone wrong, by the time you’ve rectified it, the world has moved on and new problems have arisen.”

In short, LIVED is the only end to end leadership assessment and development solution for VUCA readiness.